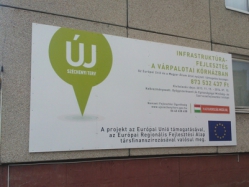 In frames of the “New Hungary Development Plan” Operational Program for Social Inftrastructure (TIOP) the municipal of Várpalota has obtained a non-refundable subsidy of 800 Million Hungarian Forints.

According to the 92/2012. (IV. 27.) Edict of government the National Institute of Quality and Organisational Development in Healthcare and Medicines (GYEMSZI) has taken over all the rights and liabilities concerning the inpatient care services from the Municipality of Várpalota. The above-mentioned change in ownership resulted in the fact, that today GYEMSZI has become the grantee and the transactor of the project called TIOP-2.1.3-10/1-2010-0001 “Infrastructural development in the Hospital of Várpalota”.

Due to the public auction the building contractor has been selected, the Pogress-B’90 Zrt. and the GYEMSZI have signed the contract on 18th October 2013 whereby the modernization of the old hospital building of the St. Donatus Hospital has began.

In the newly renovated building a centralized, modern outpatient center will be inaugurated, which will cover the outpatient care of the entire county of Veszprém. 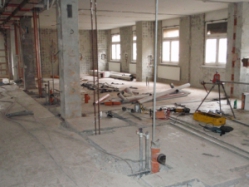 n the new OPC the two responsible care providers, the St. Donatus Várpalota Kft. and the General Medicina Kft. will move in together with an expanded professional profile.

The new healthcare provider center will have to prepare for the care of most of the age groups. It has to treat the health preservation and disease prevention of the middle-aged people with high importance in order to foster the life expectancy at birth.

During the constructions new, more professional medical devices, furniture and IT devices will be obtained.

The new center for health improvement and preservation will give place for the realization of projects fostering the healthy way of life as well as for the prevention.

Please fill out the form below, and we will contact You.